Street Creep, also called Concrete Creep, occurs as a result of the unpredictable movement, shift and expansion of concrete streets. Extreme pressure, due to traffic and natural settlement, pushes the concrete street against the driveway moving it into the home's foundation producing serious cracks in foundation walls.

This problem affects homes with concrete driveways and attached garages. Homes located at the end of "T" intersections, at the end of cul-de-sacs, and on the outside of a curve are especially susceptible to Street Creep damage.

Homes built on hills are more susceptible to creep because gravity will induce concrete streets and driveways to "slide" downhill.

Although this is a national problem, it is more prominent in wet areas and areas with expansive clay soils. Dry regions experience the downhill slide scenario. Typically, it is not as noticeable in regions without basements but it still occurs.

The most common preventative fix for street creep is installing an expansion joint between the slabs to absorb the flex. 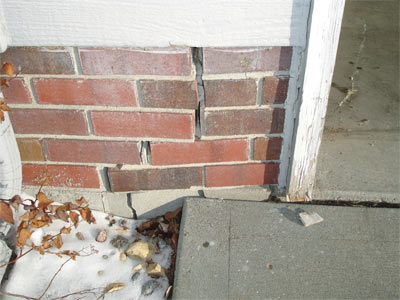 Moving concrete due to street creep can cause serious foundation damage and costly repairs.

What are expansion joints?

According to the Portland Cement Association's definition, expansion joints, also called isolation joints, are used to relieve flexural stresses due to vertical movement of slab-on-grade applications. An expansion joint is simply a buffer (usually made of wood, rubber or other material) inserted between two slabs of concrete. Properly installed, it will shrink and expand as the concrete moves, absorbing the pressure and stress of the movement before it starts cracking and crumbling the walls in your home.

Street Creep repairs are not cheap. It can range from $2,400 to $50,000 depending on the extent of the damage and the repairs involved. Sadly, homeowners can't expect any help covering that bill.

Most homeowner insurance companies indemnify themselves with what is called "Earth Movement Exclusion." Earth Movement is defined as: earthquake, landslide, mudflow, earth sinking, rising or shifting, or mine subsidence. This exclusion is usually part of your homeowner's coverage and it allows your insurance to deny you a claim for the extreme costs of repairing your foundation walls and driveway damaged by Street Creep.

Municipalities own the road. So, why aren't they responsible?

Most municipalities have a policy handling Street Creep claims. Their policy normally is that when there is "visible proof" of Street Creep they will make the necessary repairs to your driveway and decrease the potential for any future Street Creep problems. The municipality will not cover any damages to your home. The "visible proof" could be a cracked foundation causing thousands of dollars in damage. 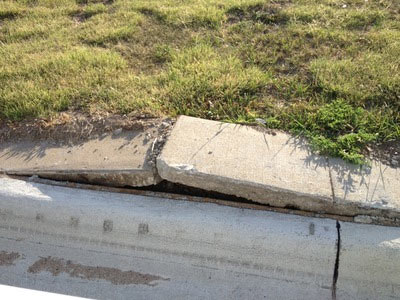 Movement of roadside concrete is a good indicator of street creep in the area.

How to check for street creep?

Luckily, street creep doesn't happen overnight. You can catch the signs of it with simple tests before it ruins your foundation.

Conduct a basic test of your own driveway and foundation for signs of street creep like this: