Iron Bacteria – commonly known as iron ocher, iron algae, or as some basement waterproofing installers call it, red slime or the "red stuff". Actually the problem is not really iron ocher. Iron bacteria are microorganisms that use iron ocher as a source of energy. Here's what basically happens in simple terms:

First, one type of these microorganisms has the ability to attach itself to the side of a pump or the inside of a drainage pipe. They do so in order to feed on the nutrients that are flowing along in the water. 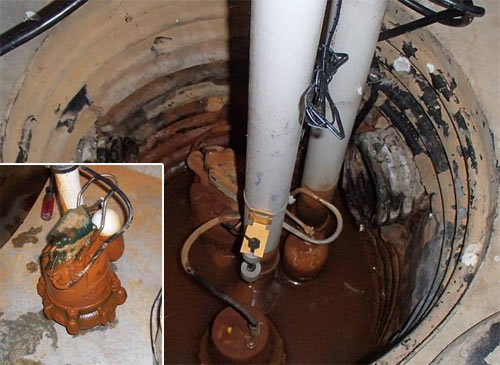 If your sump pump and pipes look like this, you have an iron bacteria problem! 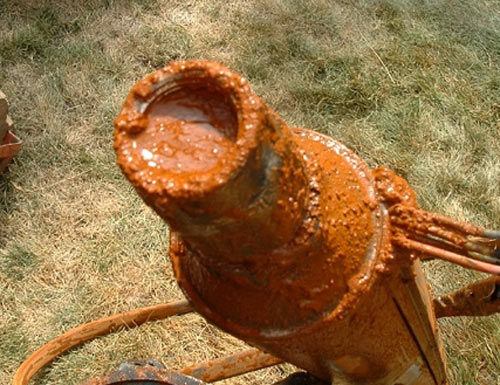 Then what happens is other bacteria called iron bacteria are now able to attach themselves to these first organisms. They accumulate in jelly like masses creating what is called a biofilm. This biofilm if left untreated can clog pumps and drainage pipes.

A smell and an oil-like substance many times accompany the "red stuff". It will appear as a rainbow colors on the surface of the water. The smell is because of the decompose material.

While iron bacteria are a nuisance, they are not harmful to humans. How would one know if they had a iron bacteria problem? Here are some clues:

I am in the process of researching iron bacteria in basement drainage systems. I am collecting data from basement waterproofing contractors throughout the US and Canada. By researching the presents of iron bacteria in different areas of the country and testing samples from these areas I believe that better ways of solving this problem will be discovered.

I believe that our industry (including myself) have been focused on the effect and not the cause. Throughout my basement-waterproofing career I have heard all types of claims of how to treat an iron bacteria problem. Let me share with you some:

Most waterproofing contractors today at best, exclude iron bacteria problems from their warranty and offer to periodical flush out their system and clean the pump and discharge line.

I am asking for any homeowner or Basement Waterproofing Contractor to add your knowledge and thoughts to this forum in the hopes that collectively we case treat the cause and come up with a solution to end the "Red Stuff" nuisance once and for all.