Tilt-up concrete walls, or Tiltwalls, are just as the name implies. They are large concrete panels poured directly onsite and tilted into place to form the exterior walls of commercial buildings.

Once the site is prepared, the tiltwall panels are actually poured in concrete forms on the floor slab and then tilted up by a crane and secured in place. They are typically secured by either cast-in-place concrete columns or other fastening devices. 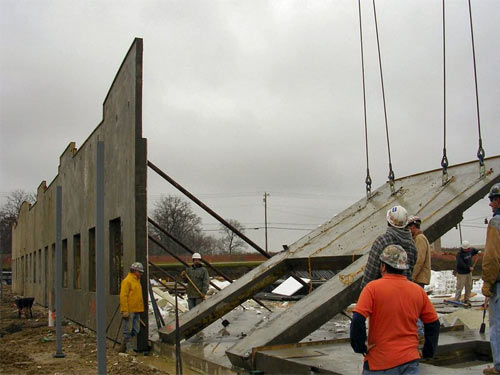 One of the most evident benefits of tilt-up concrete construction is speed. Wall panels are often placed while the rest of the building systems are designed. Other trades can begin work quickly, speeding up the time to occupancy. Tilt-up structures also offer all the energy efficiency, strength, and durability long associated with concrete.

While Tilt-up construction is fast, eco-friendly and cost-efficient, there are limitations to the tilt-up method. First, because the panels are cast onsite the weather plays a role in the process limiting the technique to certain climates and seasons. The Tilt-up method also requires space and accessibility for the equipment on site. The site needs to be open with neighboring buildings far enough away to allow for the panels to be set in place. The site should also be accessible and relatively flat to allow for the crane to operate properly. Any power lines, ditches, railroad tracks or other obstructions could also limit the crane's operation or the panel placement.

While in the U.S. concrete homes built with panel systems are still uncommon and nearly unheard of, Europeans have been building homes with precast concrete walls for over two decades.