There is new technology to solve the problem of a wet basement.

Parjana, Inc. has developed a non-electric pump designed to relieve hydrostatic pressure and push the water down below the foundation and back into the natural water cycle.

The new Energy-Passive Groundwater Recharge Pump (EGRP) is powered by the energy created from the soil as it expands and contracts. "It is hard to understand a pump that doesn't run on electricity" says inventor and owner Andrew Niemczyk, Parjana Inc., Southfield, Michigan. "The pumps have to run on energy; it is true. We are just using the energy from Mother Nature."

The soil is constantly moving; expanding and contracting. When the soil gets wet it expands and as it dries it contracts. This pump is activated by that movement in the soil: hydrostatic pressure. 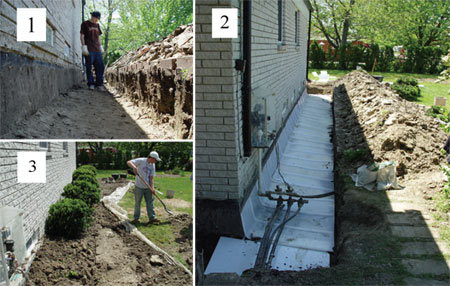 The Parjana system is a free-standing drainage system. It doesn't rely on a separate drainage system; it relies on the natural drainage system of the soil. The pumps are drilled straight down into the ground around the perimeter of the foundation. It punches through the layers of the soil and meets back up with the natural water table. "Often times, with other systems, the water is pumped into the sewer system or the storm drain where it has to be treated in order to use again" Niemczyk says. "With this system, the water is not lost. It is pushed back into Nature's water cycle and recharges the ground water."

This system replaces traditional waterproofing techniques for interior and exterior drainage applications. These pumps can be installed to solve almost every water problem. Stan Marko, Concrete Water Solutions, Columbiaville, Michigan was approached by the inventor to start installing Parjana products in 2010. "I have seen it work to solve Iron Algae, high water tables (or what is thought of as though as a high water table - when the water is trapped between two upper layers of the soil) and Artesian Wells, where the water is bubbling up from the ground" says Marko. Because it relieves hydrostatic pressure from the soil, it also solves humidity problems. Without dehumidifiers, this waterproofing system has created a 55% relative humidity level in many Michigan basements. 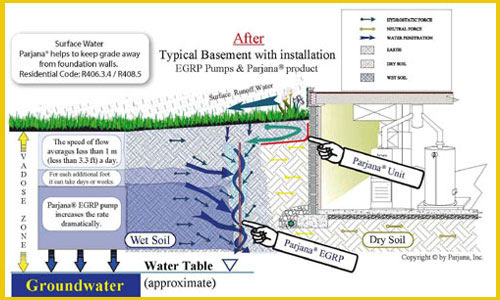 Parjana's inventor has been testing this new technology since 2004. Seven years, before its release to the residential basement waterproofing market. This technology has been tested in all soil types and categories. It works on A, B, C and D soil classifications. It can be installed to relieve hydrostatic pressure around all different types of foundations (basements, crawlspaces or slabs) or even just bad drainage areas in the landscape.

Another example was a residential basement in Michigan. It had a major problem with water seepage. The homeowner had two previous waterproofing systems installed in his basement - an interior and exterior system - and the basement still leaked. The problem was too much water in the soil around his home. The hydrostatic pressure was building up and water was seeping through the walls. Marko says the soil was so saturated around the home that drilling for the EGR pumps was like drilling into mud. After one week since installing the EGR pumps, the homeowner reported his sump pumps have been running less each day. Progressively the water will dissipate and there won't be enough hydrostatic pressure for the water to penetrate the basement walls.

The EGR pumps can also be installed for new construction waterproofing. It removes the water from the soil preparing the ground for a new foundation, Niemczyk says. By removing the water from below the foundation, it will prevent future settlement; one of the typical causes of concrete cracks.