A drain tile system, also called a French Drain, is designed to collect and redirect water seepage away from the house.

Drain tiles can be installed either on the interior perimeter of the foundation or along the exterior as a house is being built. 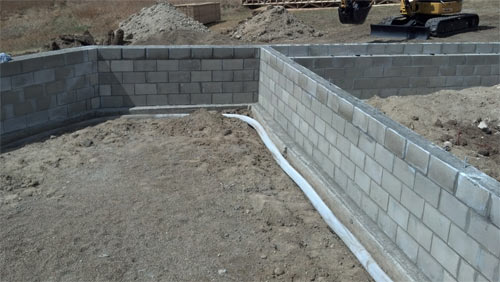 Exterior foundation drain tile being laid out during construction.

Drain tiles basically consist of a perforated pipe (typically a PVC pipe with weep holes along one side) set in a trench and covered with gravel. Some contractors cover the pipe with a nylon filter sock to prevent the pipe from filling with debris. Usually the water that enters the pipe is then redirected to the sump pump or away from the foundation by gravity flow.

Most drain tile systems are designed from the same concept. The differences come in the materials, shape of the pipe, and placement.

Differences in Materials and Shape

Before the 1950s, drain tiles were made of a red or orange clay material. The original drain tiles had no holes in the pipe, but instead the sections were laid with a quarter-inch space between them to let in water. Now, drain tiles are made with plastic or PVC perforated pipes.

Manufacturers have designed drain tile pipes in various shapes from round, rectangle, and square to oblong variations or pipes vents with multiple openings for increased flow.

While the main difference in placement is outside versus inside the basement, there are mainly three different placement options for interior drain tile systems.

The most common placement for drain tile systems in existing homes is below the concrete slab. To install this option, a portion of the basement floor is removed (approximately 12-24 inches from the concrete floor). Then, a trench is dug and the pipe is set in place and covered with washed gravel. Usually contractors install a waterproofing product to direct water that enters through the foundation wall to the drain tile. The concrete is then replaced.

Exterior drain tiles, more commonly know as footing drains, are usually installed during construction. The drain tile around the outside of a foundation acts as a piping system to collect and redirect subsurface water that moves down into and through the soil.

Exterior drain tiles can be placed beside or on top of the footing. All exterior drainage systems must drain to a sump that can be pumped out.